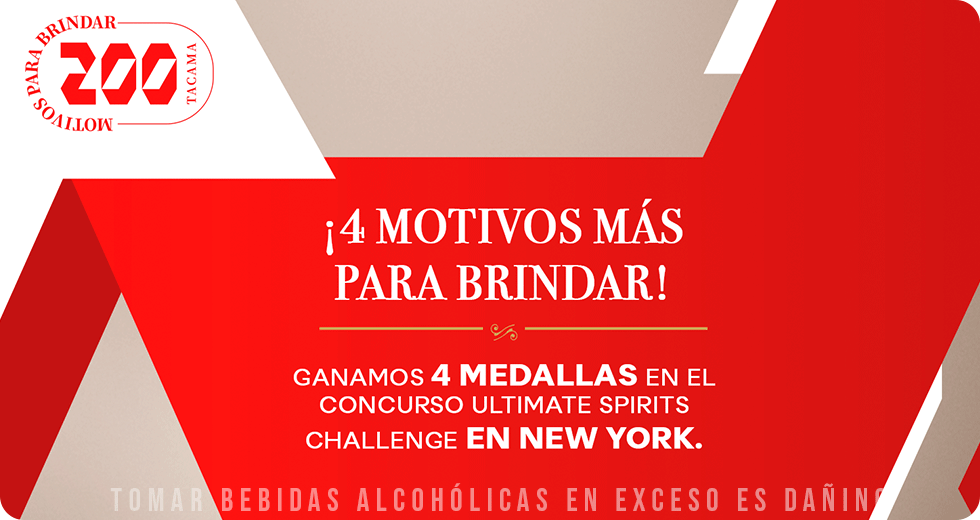 Since 2010, the Ultimate Spirits Challenge (USC) takes place in Nueva York, USA. There, products of 52 countries participate and the judges, a selection of the best qualified expert in the world —journalists, buyers, authors, bars owners—, blind taste and rate the distillate using a 100-point scale. USC’s mission: restore the integrity in spirits competitions.

“The spirits are obtained through the distillation process of a ferment and have higher alcoholic strength than other alcoholic beverages, such as wines or beers that only gets of fermentation”, explains Frédéric Thibaut, Tacama winemaker. “Also referred as distillates or aguardientes, usually have ranges of alcohol by volume (ABV) from 38% onwards. Even, there are products with 69 % ABV in the market, like the Over-Proof rum”, adds Alexander Holender, professional bartender.

The land of Pisco

Let’s make this clear. The Demonio de los Andes line was born in 1965 and it is made with grapes 100% from Tacama vineyard. In addition, “it is known that Piscos should rest for three month minimum, but Demonio de los Andes rest between six and eight month. It is done in steel vats at a constant temperature of 10 degrees Celsius, achieving spirits extremely gently in mouth”, tells Holender, line ambassador.

Gran Demonio, from Mosto Verde line, was created in 2013. “We could say that it is the top line, therefore, the name Gran Demonio. Its production is more expensive and its process is slightly different. For a Mosto Verde Pisco, the fermentation process is interrupted and the yeasts fail to consume all the sugars present, so less alcohol is produced. However, it doesn’t imply less alcohol in the obtained Pisco, but a need of more grapes to reach the level between 42.5 % ABV and 44 % ABV that characterize the Gran Demonio line. Thus, it rests in Steel vats more time: from 10 to 12 month minimum”, says the bartender. The result is delicate, very subtle Piscos, with an incredible aromatic expression and good permanence.

“The recognition of the Piscos of Demonio de los Andes and Gran Demonio lines are the direct consequence of the passion for Pisco  inherited through generations, the decades of oenological studies,  the hard-working team and the highest quality of Pisco made by Tacama, always a pride for the country”, assures Holender. Because, the first Peruvian vineyard breathes Pisco

In this competition, the Pisco Demonio de los Andes Italia got 95 points and the Chairman’s Trophy, the highest honor of Ultimate Spirits Challenge (USC). Also, it was part of the Top 100 Spirits 2021, the list of the best spirits of the year. “The Italia grape is a delicate variety and needs heat in its early stages. In its Pisco is appreciated, primarily, the aromatic intensity and complexity. It offers a unique combination of flowers and citric”, reveals the winemaker Frédéric Thibaut. According to the tasting note of the USC, only published when obtain more than 85 points, Demonio de los Andes Italia stands out for its exotic and vibrant aromas of lily, acacia, nectarine, and papaya. The palate is juicy and lively with expressive notes of juicy melon, guava, and potpourri.

The Pisco Demonio de los Andes Quebranta got 92 points, achieving finalist level. Its grape, Quebranta, is strong and vigorous. Its Pisco always has much volume and persistence. The tasting note, in charge of the Ultimate Spirits Challenge jury, mentions that, in this distillate the mineral notes of river stones, flint, and hay are underlined by pronounced aromas of white flowers, stone, and tropical fruit. White peach, pear, and guava are followed by subtle flavors of crushed chalk and clay in the long finish.

The Pisco Demonio de los Andes Acholado —the union of Italia, Quebranta, Moscatel and Albilla Piscos—, with its 91 points, was considered as Great Value. This is Tacama’s most awarded Pisco, it has around 30 awards and recognitions in the past decade only.

Last, but not least, the Pisco Mosto Verde Gran Demonio Albilla got 90 points, a considerable score. Moreover, after 80 points it is considered a sufficient achievement for the competition to publish the result, giving it notoriety. Another interesting fact: “In Tacama, the Albilla plots are centenarian. It is a grape that adapts to different soils, pruning seasons and adjust very well to the Ica valley. In its Pisco is appreciated its softness, common in all Mosto Verde. Its texture is very delicate, like a caress on the mouth, despite the alcohol intrinsic to the product”, affirms the winemaker Thibaut.