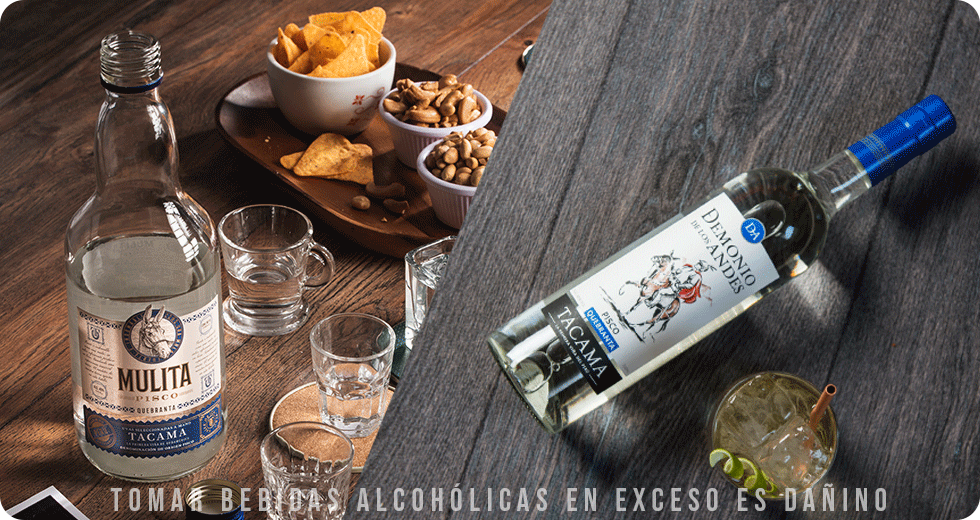 Born in Peru and adapted to Ica valley, Quebranta grape celebrates its day this August 6th. It is the perfect reason to learn everything about the most cultivated variety of the country. In this opportunity, we also celebrate with a guide for preparing the perfect cocktail for the occasion.  Take note!

In Ica, August is the traditional pruning month for Quebranta grapes, marking the beginning of a new production cycle. From then, all the tasks and efforts are made to reach the harvest in February and March, with high quality bunches. That’s why, this month was chosen —the 6th to be precise— to celebrate Quebranta. “Just after celebrating the Bicentennial, it is right to assign one day to the variety of grape most cultivated in Peru, base of the Pisco production and, now, a revalued strain for wines”, affirms Karl Mendoza, agro-ecological wine researcher and consultant of Instituto Regional de Desarrollo - Costa (IRD) of  Universidad Nacional Agraria La Molina (UNALM).

Moreover, it is a creole strain, it means: a grape born in Peruvian soil as a result of the natural crossing of two Spanish strains, the Listan Prieto and the Mollar Cano. By the way, “this is known thanks to Tacama that sent the plant material in 1961 to the ampelographic collection of the Vassal-Montpellier Grapevine Biological Resources Center (INRAE), in France, to preserve the heritage. Genetic analysis revealed its true origin”, reveals winemaker Frédéric Thibaut.

Even more, according to some studies, it is presumable that the crossing between Listan Prieto and Mollar Cano had been made between XVII and XVIII centuries, in the boom of wine and aguardiente production, mainly in the Ica region. Then, the new variety coexisted in silence with its parents until, little by little, the viticulturist noticed it was different from the rest and started to spread it. It was named Quebranta, probably for its similarity with the Spanish grape Quebrantatinajas.

In Tacama, Quebranta is the most planted variety. Of its 250 hectares, this strain occupies 36 hectares more than any other. And this happens all over the country. “There are no official numbers, but I estimate that in Peru Quebranta should have approximately 4000 hectares”, sustains the winegrower consultant, Karl Mendoza.

In the field, Quebranta is vigorous, strong, of very hard shoots and straight growth. It is used for Pisco, its natural destination, and wine production. Among its qualities, it stands the high levels of maturity that reaches; therefore, its berries concentrate a considerable amount of natural sugar. This way, “it gives the distiller, considering the amount of grape entered, an excellent Pisco production yield”, points the winemaker Frédéric Thibaut. In a Pisco made with Quebranta, usually, is found notes of nuts, for example, walnut, and vegetable touches like straw or hay. At the same time, it could offer fruity notes of banana, peach, plum and smoked notes. Aromatically, it is not necessarily a very intense Pisco, but it has good complexity. Its hallmark: in palate, its volume, softness and persistence impress. “Quebranta is one of the most consumed strains in Piscos”, adds Alexander Holender, professional bartender and brand ambassador. There is no doubt about it.

In wine, it is a different story. “Its color is light, less than a traditional Red. Its nose is of delicate red fruits (raspberry, strawberry and plum) and its palate is light, fruity and soft”, assures Thibaut. Its acidity, as well, is naturally low.

By now, our mouths are already watering. And Alexander Holender cocktails will be the answer any hedonist searches for and wants. “In cocktails, Quebranta gives us an excellent structure and its descriptors stand out very well. Personally, besides the classic cocktails, I really like to use it in tropical ones”, says the bartender.

- 1 lemon peel
- 1 fresh rosemary sprig
Preparation
In a mixing glass with ¾ of ice, add all the ingredients and refresh for 10 seconds. Filter in an Old Fashioned glass (short) with a big ice cube. Aromatize, expressing the essential oils, with lemon peel. Garnish with fresh rosemary.

- 1 mint or fresh peppermint sprig
Preparation
In a Highball glass (tall), add lime, strawberries, lemon juice and syrup. Muddle well and fill with ice, pour the Pisco followed by the ginger ale. Mix lightly, add a straw and fill with crushed ice. Garnish with a sprig of mint or fresh Rosemary and an extra lime wedge.

Put it on the radar: The day of Albilla Strain

Fresh, elegant and attractive: The Tacama Vineyard line is renewed