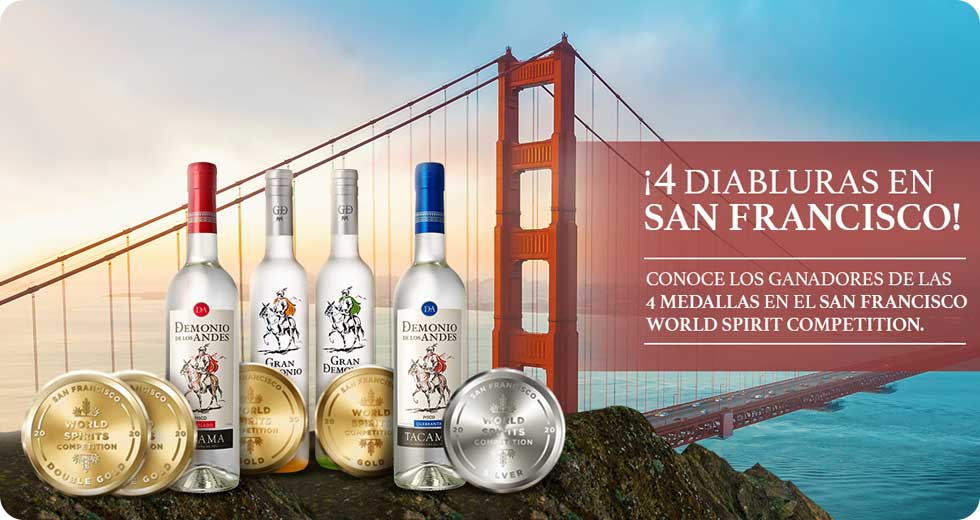 Tacama competed for the first time, and in its debut earned four
medals for its Piscos.

The San Francisco World Spirits Competition (SFWSC) was founded in 2000, a competition of spirits beverages that is one of the oldest and most prestigious of the world. The SFWSC is recognized for the quality of its judges – renowned experts in their fields and with decades of industry experience– and for the variety of categories in the competition. “The countries who participate are United States, Mexico, Chile, Japan, China, France, Spain, Italy, Greece, Sweden, England, Canada, Scotland, Netherlands, Jamaica, Australia, Taiwan, Singapore. It gives the impression that there is not a spirit that can compete internationally” says Frédéric Thibaut, oenologist of Tacama. It usually takes three days of tastings – for the pandemic, it occurred over a three-week period- and each medal granted is a testimony of hard work for the participating brand and it is an indicator of the exceptional quality of the product. We cannot ask for more.

A TASTE OF VICTORY

Currently, Demonio de los Andes, the line of pure Pisco that was born in 1965, has five labels. In addition to Acholado and Quebranta Pisco, there is Moscatel, Albilla and Italia. “When we say pure, we refer Pisco spirits which all sugar of the must is absorbed during the fermentation process. In other words, Pisco beverages of this selection are fine, with a good structure in mouth, medium-astringency and little aromatic protagonist. These beverages are the purest expression of our grapes for Pisco” explains Holender.

Let’s talk about the winners of SFWSC. Demonio de los Andes Acholado, the star of the contest with its double gold medal, it is a harmonious blend of four grape varieties: Albilla, Italia, Moscatel and Quebranta. This Pisco has earned 26 awards of 170 obtained by range of Demonio de los Andes in all its history. “The smell of Acholado is complex, fresh fruits, citric flavors and aromatic herbs, it has a very pleasant taste. In mouth, it is a correct Pisco, very equilibrated, silky, unctuous, velvety and slightly sweet” exposes Cesibell Sánchez, taster of Pisco and director of “Piscos y Tacos”.

Meanwhile, Demonio de los Andes Quebranta that won a silver medal, stands out by “its flavor to dried fruits as almonds, blond raisins. In taste, it is slightly sweet with a pleasant and persistent roasted aftertaste” affirms the taster. They are a collection of sensations (and all of them are pleasant ones).

Regarding Gran Demonio, it is the line of Pisco of green must of Tacama. It is the recent line, it was delivered in 2013 and it includes grapes as Italia and Albilla, as well as Quebranta, Moscatel and Acholado grapes. In these kinds of Piscos, fermentation is incomplete, it means, distillation is produced before all the sugar was transformed in alcohol. “There are expensive to elaborate because they need nine or ten kilograms of grapes per liter”. However, it is worth since the sensation of soft in mouth is unique” points the oenologist of Tacama.

The winner, Gran Demonio de los Andes Italia, earned the Golden medal in SFWSC 2021 and it is noted by its “smell of flower aromas and citrus scene typical of Italia’s grapes, but without exaggeration and it does have a lot of elegancy”, mentions Thibaut.

Gran Demonio de los Andes Albilla, the other winner with a gold medal, “is based on the star grape of Tacama: the oldest plots in the vineyard are the ones for Albilla and its vines produce grapes full of aromatic potentials, nothing compared to others. Therefore, it is a Pisco of a great finesse, delicacy and enveloping taste in mouth, expressive in nose and with descriptions that remember the light citrus, fruits peaches and other tropical fruits”, emphasizes the bartender, Alexander Holender. Pisco of green must are, definitely, very special products and therefore they are only produced one among 1000 to 1200 bottles per year.

Pure Pisco are very elegant, with a good structure and permanence in mouth, and Pisco of green must are very aromatically expressive, low astringency and higher density. “While the pure ones have a time to rest, at least six months, the green must ones have around ten months or more which helps that their aromatic expression be deeper and its taste in mouth be gentler,” mentions Alexander Holender. What is your plan? The bartender of Tacama takes the opportunity to teach us his recipes with the winner spirits of the San Francisco World Spirits Competition. There are enough reasons to remember why we love Pisco.

In a highball glass, add crushed ice up to fill the glass, sliced strawberries and then Pisco. After that, add grapefruit juice and pour it with tonic water. Swirl lightly with a teaspoon and garnish with a fresh mint sprig.

In a shaker with four large ice cubes, add Pisco, rosso vermouth, Campari, mezcal and refresh for around 10 seconds. Then, filter all the liquid with a hawthorne or julep strainer, pour into an old-fashioned glass that has a large ice cube. Flavor with lime peel by placing it in the glass. Garnish with edible flowers.

- 2 oz of pineapple extract or juice

- a couple of pineapple leaves

In a shaker with eight ice cubes, add all the liquid ingredients and diced pineapples. Shake vigorously for 10 seconds. Serve all the content including ices in a highball glass or coupe cocktail glass. Fill with more ice cubes if necessary. Garnish with leaves and dried pineapple.

In an old-fashioned glass, add all the ingredients, stir with a teaspoon and fill the glass with crushed ice. Garnish with the clementine wedge and fresh lemon balm sprig.

Bacchus 2021: The only Peruvian wine awarded who carrie the seal of Tacama’s vineyard

Citadelles Du Vin 2021: These are the winning Piscos (and they are from Tacama)

The plan we need for easter during this quarantine