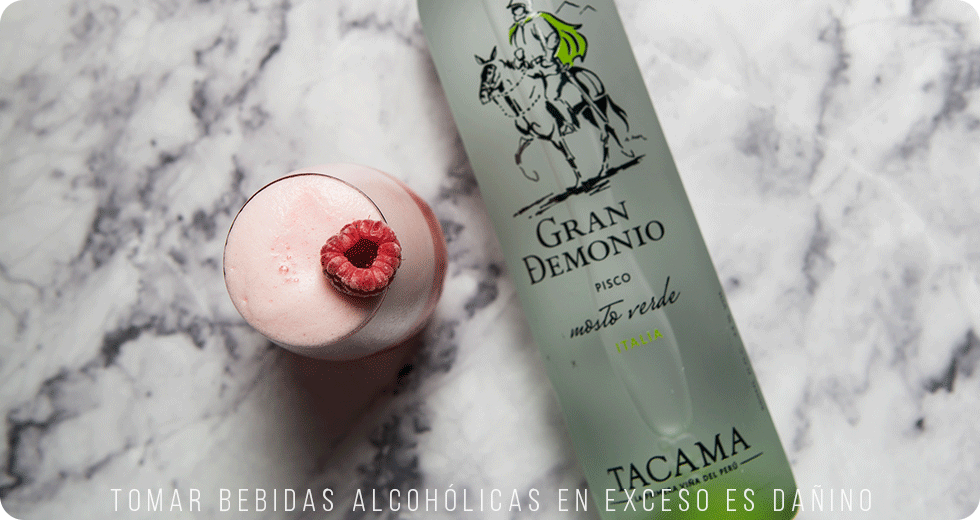 On September 4th we celebrate with Italia grape, one of the exclusive aromatic strains for the production of our Pisco. In Tacama, with six hectares dedicated to it, we invite you to celebrate this day with Pisco Punch, a legendary cocktail (and one of the most Instagram worthy).

The Italia grape has a love story with Peru.  Let’s go back to the beginning. In 1540, the first plantations of grapes were brought to the viceroyalty by the Spanish conqueror Hernando de Montenegro. Even though “it is probably that the Italia has come in the late sixteenth century, there are data on its cultivation in the seventeenth century”, tells Karl Mendoza, agro-ecological wine researcher and consultant of Instituto Regional de Desarrollo - Costa (IRD) of Universidad Nacional Agraria La Molina (UNALM).

It was firstly considered for juice use (table grape) and for wine production. “Just since the eighteenth century it started to be used for Pisco”, reveals Mendoza. The Pisco had great fame and prestige during the nineteenth and early twentieth centuries, even in countries like the United States. That way, it arrived at San Francisco bars and it was used for the Pisco Punch, “it was invented by Duncan Nicol in Bank Exchange”, adds the bartender Alexander Holender. A cocktail, by the way, made with Italia strain Pisco.

In Tacama, Italia grape should be more than 100 years. When the current century started “we didn’t have 100% Italia parcels, but it was present in those with dominance other strain, like Quebranta. Then, we rescued the vegetal material and implanted it in order to plant parcels with 100% Italia. Nowadays, these allow us to produce our Demonio de los Andes Italia and Gran Demonio Italia, and, of course, contribute enormously to our Acholados”, reveals Frédéric Thibaut, Tacama’s winemaker.

Considering the current regulations, Italia is one of the eight Pisco grapes—divided in aromatics and non-aromatics—, meaning, of the only authorized to produce Pisco. And, as Karl Mendoza says, it is the most popular Pisco white grape, because just in Lima region it has approximately 2000 hectares crops.

Even when in the field can be a bit fragile, the Italia main quality is its aromatic aspect. “Its nose is intense, elegant, floral and fruity”, affirms the winemaker Thibaut. Also, in the best conditions achieves a good level of sugar concentration, offering an optimum efficiency between the volume of grape and the obtained Pisco. It is not unusual that it big production is part of its character.

Without a doubt, Italia is a grape that deserves its day to celebrate: September 4th. “The Italia is relatively cold sensitive and doesn’t like an early pruning; therefore, this process is usually made in first two weeks of September.  That’s why this date was chosen”, explains Frédéric Thibaut.

A COCKTAIL OF ANOTHER CENTURY

Although in Tacama the Italia grape is used only for Pisco, in Peru it is also used for wine. And it is known as Italia grape —maybe for said migrants that diversified it—, but its official international name (recognized in the country in the last years) is Muscat of Alexandria, because it was considered that come from Alexandria (Egypt). Now it is known that its true origin is Greece.

It is worthy to mention a fact that any curious mind would love. There are three types of Italia: Golden or Muscat of Alexandria; pink or Muscat Rosé —Tacama have these two—and black or Muscat Hamburg. “They are similar, relatives, different in colors, but all with muscatel flavor”, assures the researcher Karl Mendoza.

Let’s focus on Pisco elaborated with Italia. For enjoy it, we just need to taste it alone in a glass. “If it is cold, the alcoholic perception will decrease and its density will slightly increase, this way the mouth flavor will be perceived in a longer lapse. However, the aroma tends to close a little and not be as expressive as if it be drink in room temperature”, details the bartender Alexander Holender. Also, the Pisco made with an Italia works excellent at the end of a meal, joined by a dessert, acting like a digestif. Some good options are Apple strudel, tres leches or lemon pie.

And, of course, it is an excellent strain for cocktails. This time, Alexander Holender teaches us to make the famous Pisco Punch, a beverage ready to party.

In a cocktail shaker, with cubes of ice, add all the ingredients and shake vigorously for 10 seconds. In a tall glass or big cup, add more ice cubes and pour the contents. Complete with ice if necessary. Garnish with dried pineapple and leafs.