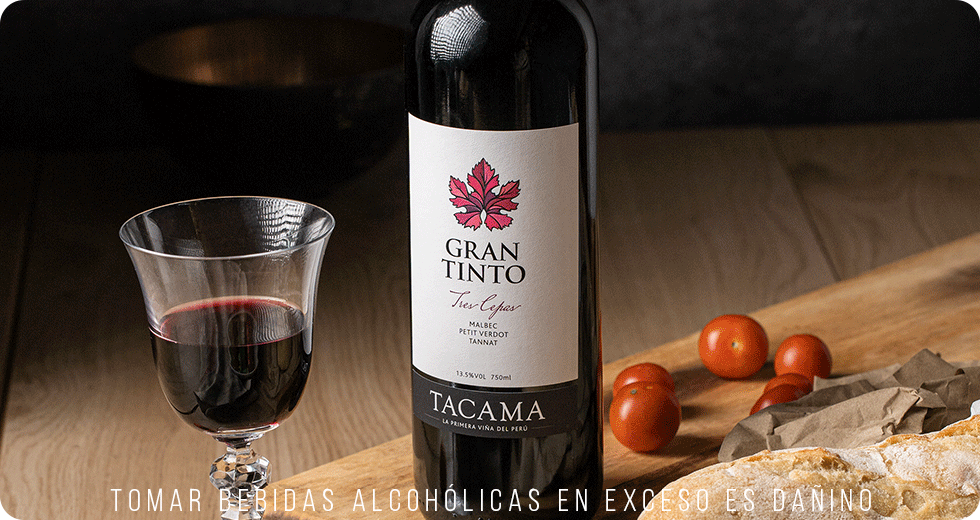 The Gran Tinto Tres Cepas of Tacama Classic line is produced for decades. With a deep purple color, intensity of red and dark fruit in nose, and with good structure in palate, it is a wine that exceeds expectations. The Gran Medalla de Oro, obtained in the International Contest ExpoVino Wong 2021, confirms it.

The International Contest ExpoVino Wong 2021 took place in August. There, annually participate all the wines that the supermarket sales, but divided in different categories, according to the price, variety and type of production. “Wong uses the products present in their stores as samples, which I applaud, because the client assures that the awarded wines are the ones that can be acquired”, says Frédéric Thibaut, Tacama’s winemaker.

The contest is conducted with an international jury, formed by winemakers, sommeliers and specialized journalists and following the standards of the International Organization of Vine and Wine (OIV). This implies the blind tasting with the littlest information of each sample (variety, year, price range). Also, it is used the evaluation cards of the OIV, meaning, a point scale to 100 between sight, nose, palate and general balance.

The results of this competition were announced in the ExpoVino Wong fair; celebrated from September 10th to 30th. This is the biggest and most important wine fair in Peru. The audience assists, the wineries have their own stands for tasting and the products are sold for attractive prices. Due to the pandemic, this year was virtual. However, it included something new: gastronomic experiences in the top restaurants of the city, such as Amoramar, Isolina, Osaka, Astrid&Gastón, Maido, Baan, Osso, 500 Grados, Cosme, El Hornero and La Cuadra de Salvador.

SINCE THE FIRST DROP

Tacama participates every year in the contest and in the fair. In this edition, its Gran Tinto Tres Cepas got the Gran Medalla de Oro and 94,7 points. “It is a spectacular mark. It competes in the Blend category of less of S/60 Peruvian soles. I think the jury considered that this wine offers a lot for an affordable price”, sustains the winemaker Thibaut. “This is the result of hard work, dedication and passion from the team in Viña Tacama, not to forget the decades of oenological studies'', adds the professional bartender Alexander Holender.

The grapes in Gran Tinto Tres Cepas are the Malbec, which adds much color, brightness, purple reflects and fresh fruit; the Tannat, which gives structure and a superior level of the existent, normally, in dry wines of that price; and the Petit Verdot, which concedes delicacy and notes of dark fruits. In general, “it is a red that stands out for its aromatic definition and tannins softness. Considering the others wines of its category, the Gran Tinto Tres Cepas has higher fruity expression and has complexity, with spiced touches and menthol notes, characteristics associated with more expensive wines”, adds the winemaker. This is a call to all lovers of good wine.

National, 20, 000 boxes are sold per year, and also count with an international recognition. It has presence in Canada, China and the United States. Including, “we received orders for France, where there is no lack of good Reds. Even so, there is space for our Gran Tinto Tres Cepas”, says Frédéric Thibaut.

A fact: this red is the start point for beginners in the world of dry wines. “It is served in a big glass, of around 21 ounces. How much? Approximately 150 ml (5 glasses per bottle)”, says Holender.  The ideal temperature is between 6 °C and 18 °C and the perfect pairing is the company of grilled meat, stew and rack.

By the way, in the International Contest  ExpoVino Wong 2021 also won the sparkling wine Rosa Salvaje a gold medal; the Blanco de Blancos Chardonnay-Sauvignon Blanc-Viognier, the Selección Especial Petit Verdot-Tannat and the Selección Especial Carmenère, each one a silver medal; and the “O” Malbec a bronze medal.

TACAMA STANDS OUT IN THE GUIDE DESCORCHADOS

TACAMA IN HISTORY: FROM THE ROMAN AMPHORAE TO THE PISQUITOS