Demonio De los Andes: "The life behind the legend" 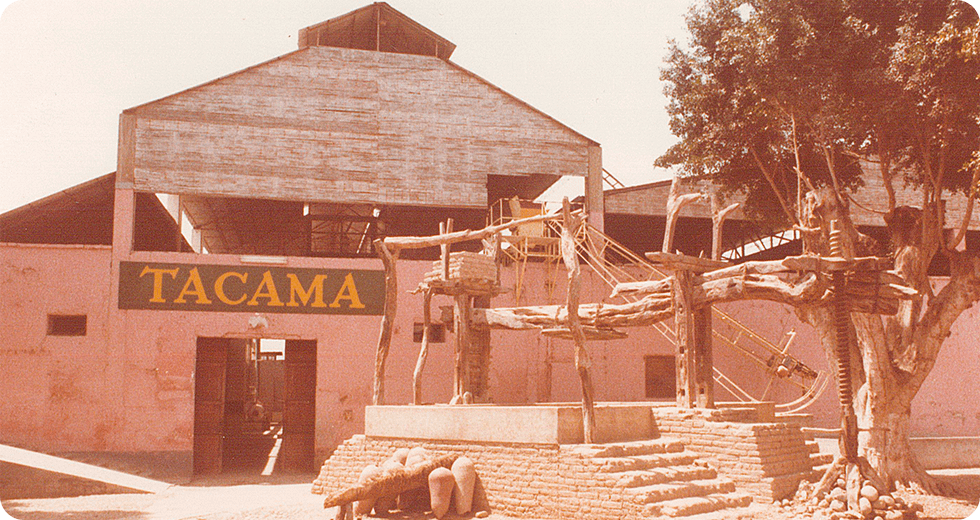 The history of Tacama is profound and colonial. The first wine cellar of South America has been witness, and on many occasions participant, of a great deal of the history of Peru

Its long timeline gave it the possibility of taking part in the extended intertwined events that marked the history of the Andean people. The story begins around 1540. The colorful traditions of the inhabitants, the aroma and flavors of the generous latitudes, the passion of the conquistador incarnated in the sword and the cross, and the challenges of a vanguard contemporary Peru are woven together.

When a wine cellar becomes heir and guardian of such a significant token, it is but mere fairness to be especially thoughtful when it comes to naming its products. Since these will become the heirs and the guardians of the stories that will defy the passage of time.

"Demonio de los Andes" is a name with which Tacama's pisco gives tribute to Francisco de Carbajal and at the same time, what is Pisco if not a tribute to the history of Peru.

Francisco Lopez Gascon is the birth name given to a man who nonetheless would become history under the names of Francisco de Carbajal and "el Demonio de los Andes" (The Demon of the Andes) alias that truly does him justice and whose sincere tradition was gained by bravery, blood, and character.

He was born in the year 1464 in Rágama de Arévalo, Spain. But his character and identity were molded by the forces only a world-wanderer is challenged upon.

With great effort, his family managed to send him to Salamanca to get a University degree, but Francisco was more interested in the taverns and amusing himself, than the teachings of a classroom.

Having failed his studies he returned home. His family was shocked by the return of a son then, instead of coming back with a diploma under his arm; the story tells that he was seen with a harlot, a lad called Moreta, a donkey, a monkey, and a guitar. Such was the scandal that he was expelled from the family house.

Virtually disinherited he joined under the orders of "el Gran Capitan Gonzalo Fernandez de Cordova". This was the genesis of the tough man-at-arms.

His abilities with the sword were set to wait given that in an interesting twist he was to work under the orders of the Cardenal: Bernardino de Carbajal (where his last name came from). His encounters with the Faith were profound but short-lived. He took ecclesiastic studies and became part of the clergy. But, years later, he would resign the practice of evangelizing and therefore ending his religious votes.

At some point during this story, he met a widow named Catalina de Leston with whom he decided to travel to New Spain (North America), and there they got married under orders of the Viceroy himself.

Our story: about Francisco de Carvajal and Perú

There is no precise information nor bibliography about the arrival of Francisco de Carvajal to Peru. In Jose Antonio del Busto’s   « Diccionario Histórico Biográfico de los Conquistadores del Perú” (Historical dictionnary of Biographies of the conquerors of Peru), he recounts:

“He arrived to Peru under unknown circumstances, renowned as a great soldier with a very good sense of humor.”

He settled in the Imperial city of Cuzco where he had such a good relationship with the neighborhood at the beginning that he became the city’s mayor.

It is in this land of ours that our endearing character will begin to forge his nickname, which would give him a special place in history as one of the most interesting biographies in Colonial America: “El Demonio de los Andes ».

Fighting in numerous battles he demonstrated a ruthlessness never seen before. He ruled by force of his spade in the battlefield and bestowed justice with an iron grip.

Strategist, tenacious and persistent when in battle, he never lacked courage nor the predatory instinct of those who go into battle motivated more by the pleasure of a sport than by sense of duty.

It is said that he was merciless with his enemies as well as with his own people. It was usual for him to punish his own troops for laziness or lack of bravery in a disproportionate and biased way.

His last battle was at Jaquijahuana in Cuzco. Defeat found him brandishing Gonzalo Pizarro’s rebel flag. He was loyal to him until his last breath.

From the beginning, Francisco Pizarro´s rebel army was outnumbered by La Gasca’s royal army. Since the very first moments chance turned against the “Demonio de los Andes”; most of the rebels turned him down and joined the enemy.

It is known that when Francisco de Carbajal noticed that his troops had all but vanished and that he was left alone in the battlefield far from being afraid he accepted the situation with an acute sense of humor and irony.

And thus started to sing:

He never surrendered and tried a hazardous escape through the traitorous geography of the untameable Andes.

The final hours of his life. The beginning of the legend

Fleeing the battlefield as quickly as he could on his horse Boscan, the “Demonio de los Andes” was to find in a swamp the beginning of the countdown. The horse tripped over and in its fall caught the leg of the desperate rider. Incapable of freeing himself of the beastly trap destiny had forced upon him, Francisco started to cry for help, it was the worst of luck that the enemy found him first.

Diminished and captured he was taken before President Don Pedro de la Gasca, now known as ‘The Peacemaker of Perú’. De la Gasca with a scornful and pejorative gesture refused to see him, probably much to the “Demonio de los Andes’ relief whom we gather had even less desire of begging for his life in front of his sworn enemy.

Confined in a tent, aged 84 he awaited for his sentence. The sentence was issued by the Marshal Alonso de Alvarado and the Judge Andres de Cianca and it was mortal as well as degrading and bloodthirsty. He was charged with high treason against the king and so he was sentenced to be dragged by the tail of a horse in a leather bag, to be hanged, to have his throat cut and be dismembered all of this previous to the confiscation of all his belongings.

Chronicles recount that on his way to the executioner, Francisco de Carvajal without losing his temper and irony laughed at his destiny and mocked the soldiers who annoyed him and celebrated his imminent torment and death.

His execution was carried out following strictly horrid instructions on the day of April the 10th 1548 just one day after he was captured.

His remains were scattered in all directions in order to send a strong message to all rebels. His head was the strongest possible message as it was hanged in a cage in the principal square of Lima, for all to see. His home was destroyed and salt was spread over his lands so nothing would ever grow again.

This is the story of a man that belongs to the most profound history of Peru and even today admits many interpretations and generates passionate debates among historians and the general public. There’s no point in denying the influence and deep roots that the “Demonio de los Andes” has achieved in the Peruvian history, he has earned a place no one can replace. As well as the Pisco, he belongs to the identity of a nation with a profound history and a promising future.