Citadelles Du Vin 2021: These are the winning Piscos (and they are from Tacama) 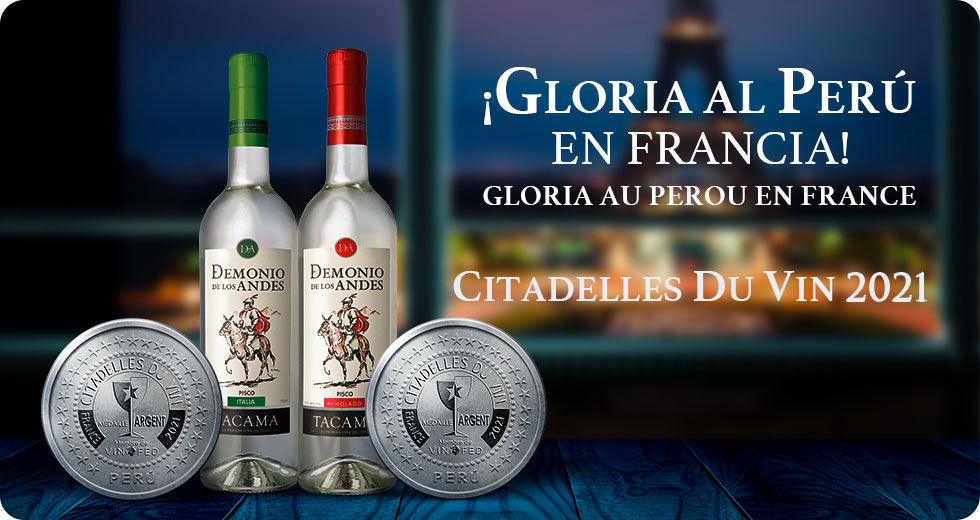 The history of this contest began in the year 2000. Each year, wines and spirits such as cognac, armagnac, and Pisco, participate in Citadelles du Vin. “The contest is endorsed by the International Organization of Vine and Wine (OIV), and it is also a member of the VINOFED, an important reference in terms of international contests,” mentions Frédéric Thibaut, Tacama oenologist. The name itself illustrates its principles.

In the context of COVID-19, the 21st edition of this contest took place in Bourg sur Gironde, close to the city of Bordeaux, the center of French viticulture. All sanitary measures were carried out to avoid transmission of the virus. In three days, 35 professional wine tasters—someillers, oenologists, buyers, journalists—tried 769 samples of spirits and wines from 28 countries.

A COUPLE OF CHARMERS

One of the winners, Pisco Demonio de Los Andes Acholado, is a mix between different strains: Albilla, Moscatel, Italia and Quebranta. “It contains half of our Pisco grapes, so it’s complexity is important because each strain has different descriptions. This composition makes it very versatile,” highlights Alonso Palomino, professional bartender. “It is an Acholado with a good aromatic bouquet, where we find herbal, floral, citric, and fruity profiles,” explained ambassador Alexander Holender.

The other winner, Pisco Demonio de Los Andes Italia, has great flavor permanence in mouth, and it is subtle and pleasant due to its medium-low astringency. “The Italia grape is a fragile variety that requires a lot of care in the field. It is also a more demanding strain in terms of weather, compared to a Moscatel or Albilla, for instance,” explains oenologist Frédéric Thibaut. It is also considered an aromatic grape. “There are Italia Piscos that seem more like perfumes than Piscos. Demonio de los Andes possesses an enchanting citric and floral aromatic finesse and elegance,” adds Thibaut.

The silver medals won in Citadelles du Vin 2021 are a reflection of Piscos' quality. “They are extremely important. They have filled up with the motivation to continue with our passion and it makes us deeply proud to honor the name of our country, Peru,” indicates Holender. Yes, Tacama has done it again.

What better way to get to know their Piscos than trying them? To enjoy Demonio de los Andes Acholado or Demonio de los Andes Italia, any moment goes. Indispensable: whichever you choose, try it on its own. Two ounces or sixty milliliters in a glass (preferably an Afnor) are enough. “This will serve to get to know it in its whole expression,” suggests Alexander Holender. “When it comes to Pisco, it is best to serve it at room temperature, so it can express its aromas and flavors,” advises professional bartender Alonso Palomino.

For pairing, “Demonio de los Andes Acholado is a horse full of life and fruity sensibility and, if we manage to tame it, it will guide us on a journey alongside seafood and Nikkei cuisine,” ensures José Bracamonte, sommelier artist at Marca País. Meanwhile, “Demonio de los Andes Italia connects us with nature and provides us with a sensory oasis of chamomile, fertile soil, and lemon peel. It pairs well with spicy skewers, as any good Peruvian would enjoy,” adds the sommelier. Seconds, anyone?

Of course, since Pisco Demonio de los Andes is very versatile, it can also be used to make cocktails. Acholado or Italia adapt to fit bartending like a glove. Bartender Alexander Holender teaches us a couple of recipes that will delight even the most exquisite palates.

Preparation:
In a balloon glass filled with ice to the brim, add Pisco. Then, add the Campari and the Mr. Perkins pink soda. Stir lightly with a teaspoon. Decorate with the orange slice.

In an old fashioned glass (short whisky glass), add the Pisco, bitter, and vermouth. Add with ice cubes to the brim. Stir lightly with a teaspoon for 15 seconds to cool and allow for diluting. Squeeze essential oils from the lemon peel over the cocktail and leave it in the glass.

Bacchus 2021: The only Peruvian wine awarded who carrie the seal of Tacama’s vineyard

The plan we need for easter during this quarantine